You are here: Home Exhibitions Painted Dreams: Tales, fantasy and dreams in Hungarian art of the early twentieth century

The artistic and scientific discoveries and movements born in the European centres of culture during the early 20th century brought about a golden age in Hungarian art. 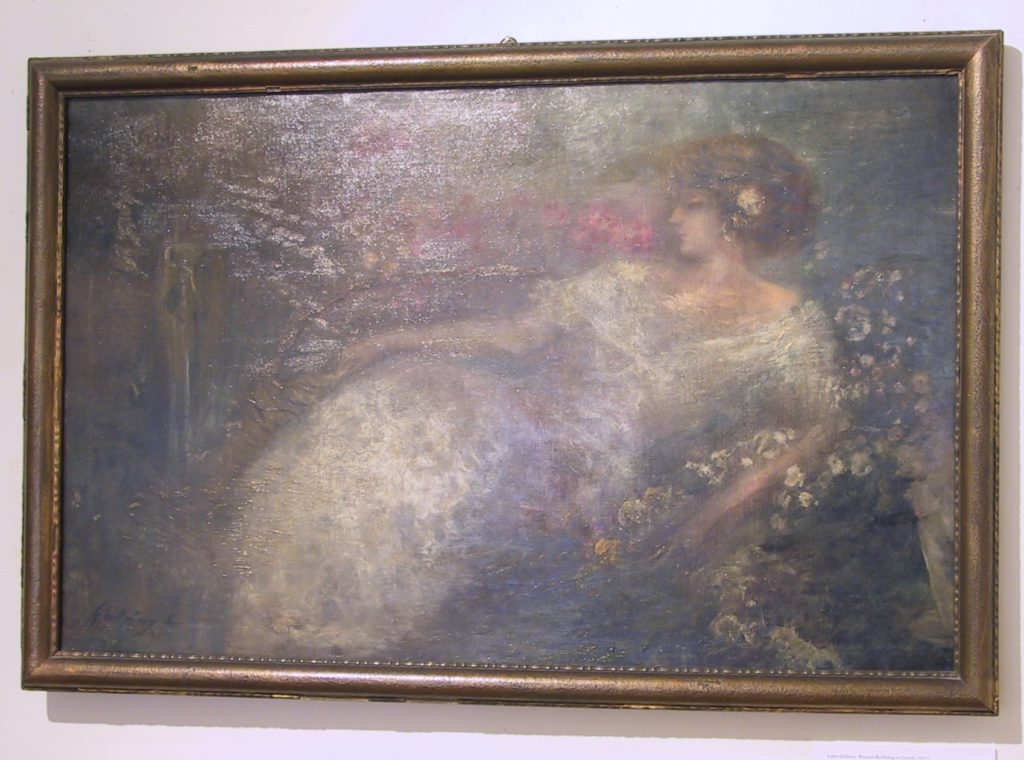 Local tradition (folk tales, folk art, dreams/myths) and the spirit of inquiry of the new social/spiritual movements melded harmoniously in the work of the artists of the Budapest School.

This exhibition, curated by Katalin Keserü, Director of the Ernst Museum, Budapest, and suggested by Judit Szekacs from the Multi-Lingual Psychotherapy Centre (MLPC), ran in the museum from 12th November, 2003 – 18th January, 2004, as part of Magyar Magic 2004 – a year long festival of Hungarian Culture.

For the duration of this exhibition the museum became a corner of the pre-First World War Austro-Hungarian Empire in which Freud grew up. The paintings and Freud’s house belonged to the same cultural background, and the visions painted by these artists emerged from the same decadent Romantic Zeitgeist and the upheaval of war that Freud too experienced. 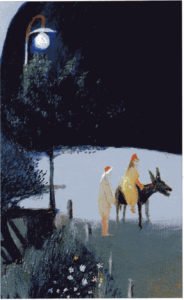 The exhibition at the Freud Museum was selected from public and private collections in Hungary, and highlighted the work of four artists: Lajos Gulácsy, Tivadar Csontváry Kosztka, Anna Lesznai and Attila Sassy. This was the first time these major Hungarian painters had been shown together in Britain. Each had their roots in nineteenth-century British art, yet each retained their own individual voices: the written and visual fairytale world (originating in peasant art) of Anna Leszani; paintings by Tivadar Csontváry Kosztka, searching for the reality of myths and the dynamic link between spiritual and physical energies; the “painted dreams” of Lajos Gulácsy, 2the Hungarian Pre-Raphaelite”, which relive the past and create a world of fantasy through memory; and the erotic ‘opium dreams’ of Attila Sassy.

The works reflect the socio-cultural environment in which Freud worked and in which psychoanalysis was born, and the often turbulent internal worlds of the artists themselves.

The Artists of Painted Dreams

Lajos Gulácsy
He was born on 12 October 1882 in Budapest. He was still in secondary school when his works were exhibited in Budapest’s Mûcsarnok (Picture Gallery). In 1900 he began his studies in Budapest’s School of Design (today University of Fine Arts), but from 1902 he spent most of his time working in Italy, studying at the Instituto Reale di belle Arte in Florence. Many of his works also show the influence of the British Pre-Raphaelites (Burne-Jones, Hunt and Millais) who had been widely exhibited in Hungary. In 1910 he first wrote about and painted images of his fantasy world, Na’Conxypan. In 1914, upon hearing that war had broken out, he suffered a mental breakdown, and wound up in the San Servolo Hospital in Venice. When he returned home he was invited into the circle of Lajos Kassák and other young artists. Meanwhile he was still receiving treatment for his mental imbalance. In 1919 he was institutionalised. In 1922 his works were exhibited at the Ernst Museum. In 1932 he died in the mental institution in Lipórmezõ.

Tivadar Csontváry Kosztka
Born 5 July 1853 in Kisszeben (today Sabinov, Slovakia) Kosztka studied to be a pharmacist, but also attended medical and law school in Budapest in the 1870s. In 1880 a voice from the heavens called upon to take up painting. He visited Paris and the Vatican’s picture gallery, and later opened a pharmacy in Upper Hungary (today Slovakia), providing himself with the financial means to pursue his calling. In 1984 he began his studies of art in Munich, Karlsruhe, Dusseldorf, and Paris. In 1903 he made a tour of Western Europe. He was shipwrecked in Malta, and later travelled to Egypt and the Near East, arriving in Bethlehem for Christmas. In his travels he was searching for a new world of colour and perspective. In 1905 he held an exhibition in Budapest, and later travelled to Lebanon where he produced his major works, paintings of cedars and the 30-m painting Baalbek. These were exhibited in 1907 in Paris, in the hall of the Grande serre de la ville de Paris. The haunting work shown here reflects the sense of geographical and physical dislocation which was evident in his life. He continued his work in Nazareth and Palestine and had two more exhibitions in Budapest, in 1908 and 1910. His mental health was failing; nevertheless, his sense of responsibility as an artist and citizen led him to publish numerous flyers and brochures. He died in solitude in 1919.

Attila Sassy
He was born on 17 October 1880 in Miskolc. From 1898 he studied at various free schools in Hungary, Munich and Paris (Julian Akadémia, École de Beaux-arts). He used the pseudonym Aiglon (eaglet). When he returned home he joined Miskolc’s circle of intellectuals. In 1909 his first album of prints was published. His ‘Opium Dreams’ shown here is inspired by the work of the British artist Aubrey Beardsley. His first one-man show was organised in 1910, and his last in 1943. He died in 1967 in Budapest.

Anna Lesznai
She was born Amália Moscovitz on 3 January 1885 in Budapest. Her mother’s family was one of Hungary’s most noted art-collecting families. From 1904 she studied in Budapest and Paris (with Lucien Simon). She was also a student at the Kunstgewerbeschule in Berlin in 1912 and Vienna in 1920. Her work draws on Hungarian peasant art and also the British Arts and Crafts Movement and William Morris. The peasant-painted furniture in the room complements the pieces perfectly. In 1908 her works of poetry appeared in the journal Nyugat. In 1909 she joined the Constructivist-Expressionist art group known as Nyolcak. She held her first independent exhibit in 1912 in Berlin. From 1913 her tales were published. At this time she married Oskár Jászi, a free-mason, social reformer and politician. She became a member of the Vasárnapi Kör (Sunday Circle) in 1915. In 1919 she participated in the work of the Hungarian Soviet Republic, and later emigrated to Vienna. In 1931 she returned to Budapest, and in 1939 moved to the United States, where she frequently lectured and taught courses on Hungarian art and Design. She died in New York in 1966. 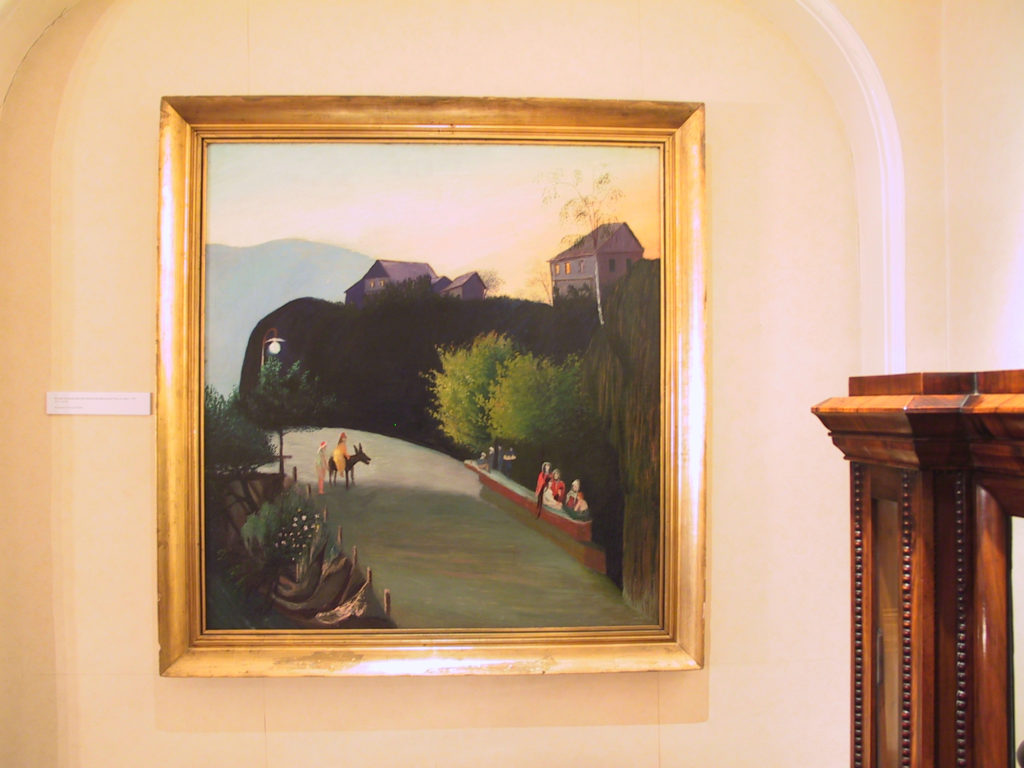 Freud and Hungary
When Freud arrived in London in 1938 he brought with him his Viennese possessions and furniture and reconstructed in 20 Maresfield Gardens a replica of fin-de-siècle Vienna. Painted Dreams, the exhibition of early 20th c. Hungarian art which we are showing as part of the Magyar Magic 2004 festival, brings another aspect of Freud’s early environment into his London house. It is no accident that these paintings match the house almost as if they belonged to the original furniture. They belong to the same cultural background: the visions painted by these artists emerged from the same decadent Romantic Zeitgeist which Freud too experienced. For the duration of this exhibition the Freud Museum has become a corner of the pre-First World War Austro-Hungarian Empire in which Freud grew up.

For everyone in the Austro-Hungarian Empire, the First World War was a watershed. For Freud and psychoanalysis, it was the beginning of a period of international acceptance and expansion. For some of the artists in this exhibition, it meant despair or madness. Gulácsy’s sketch Guerra (1914-15) with its fool surrounded by grotesque figures reflects this vision of an irrational world. When the misty fantasy of Gulácsy’s The Opium Smoker’s Dream (1913-18) disperses it will reveal the muddy trenches of the Western Front. The war was an upsurge of unconscious forces for the artists as it was for psychoanalysts. What Freud and his colleagues studied, these artists suffered.

The Empire collapsed in the war and it was during these troubled years that psychoanalysis formed its own brief “Dual Monarchy” centred on the twin capitals of Vienna and Budapest. After Jung and the Swiss had abandoned the International Psychoanalytic Association, the young Hungarian analyst Sándor Ferenczi became Freud’s heir apparent. During the war Freud visited him several times in Hungary and in autumn 1918 he organized the first post-war international psychoanalytic congress in Budapest.

The following year, during the short-lived Hungarian Soviet Republic, Ferenczi was appointed Professor of Psychoanalysis at the University of Budapest, the first ever academic recognition of the new science. Freud also began looking to Hungary for funding. A patient of his, Anton von Freund, a millionaire brewer from Budapest, pledged funding to establish the International Psychoanalytic Press. Meanwhile the Hungarian translation of the Interpretation of Dreams was on the verge of publication.

Things did not turn out as hoped. Anton von Freund died in 1920 and post-war inflation swallowed up the funds he had bequeathed to the movement. In the 1920s, instead of taking control, Ferenczi gradually distanced himself from the International Psychoanalytic Movement. And it was only in 1934 that the long-delayed Hungarian translation of Interpretation of Dreams finally appeared.

As for Freud, he never returned to Hungary after 1918. But Anna Freud did, during the 1930s when Austria, Hungary, Czechoslovakia and Italy organized a “Four Nation” group to bring together the psychoanalysts of their now isolated countries for discussions. By this time Freud himself was too old and ill to participate. And after the Second World War there was no longer any place in Hungary for psychoanalysis. It would take over 50 years before for the border between Austria and Hungary to open.