You are here: Home Exhibitions Werner Reiterer – Trousers for the Brain

Werner Reiterer – Trousers for the Brain

Werner Reiterer’s soft interventions could not have found a more appropriate setting than the Freud Museum. 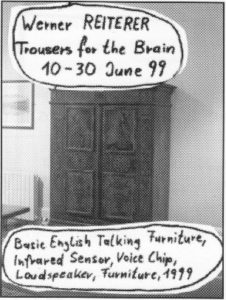 The museum is a house already inhabited by charged objects, things displaced in time and in space, things offered for contemplation and open to question.

Reiterer’s installations slipped in between the various and unpredictable expectations of those that come to pay their respects to the founder of psychoanalysis. One’s curiosity at a cabinet produced a squeak from under the carpet. A desk lamp illuminated a message in invisible ink which disappeared again if one took a step away: More than 80% of what the universe consists is invisible: so too is this museum. A wardrobe started practicing English as one approached it. In a gesture that almost summed up the nature of the museum, Reiterer installed little telescopes suspended by red threads so the visitors standing behind the red ropes could project themselves into Freuds consulting room, across a few metres of space and almost a century of time.

In his work Reiterer changes things: space becomes furnished with riddles and riddled with connections. Inanimate objects stir into somnolent life. Walls and furniture accost us with their walls-and-furniture insistence. Artificial flowers take root. Familiar things become improbably buoyant or inordinately heavy. Time is bent and stretched. Reiterer sets traps for what we know. Inanimate objects are animated as much by the viewer’s interaction as by the artist’s intervention. He provokes a space of anticipation, an echo of the uncanny.

For this, Reiterer’s first solo exhibition in the UK, he created parallel installations at the Institute’s gallery and at the Freud Museum, exploring ideas associated with displacement, exile and extraterritoriality.