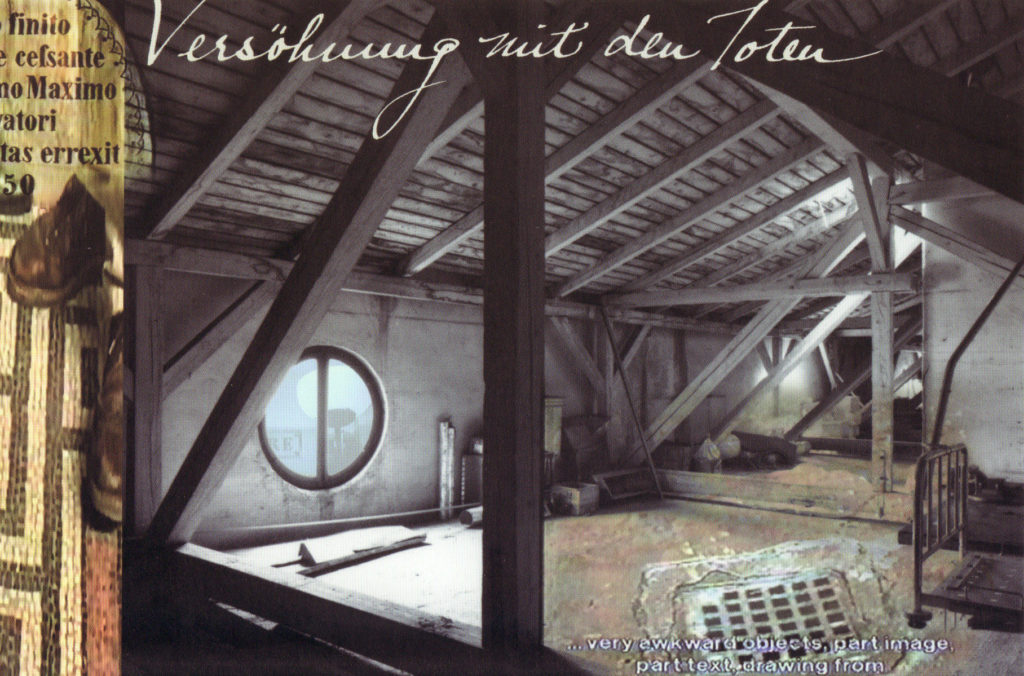 Reconciliation with the Dead © Vera Frenkel

Frenkel’s multidisciplinary practice interrogates the learning and unlearning of cultural memory, the abuses of power and its consequences, and the bureaucratisation of everyday life. As Gottfried Fliedl observed: “Body Missing offers the opportunity to shift the focus of the debates on ‘looted art’ from their mainly everyday and legal-administrative context to the more general issues of memory and the ability to commemorate.”

Body Missing, a six-channel video-photo-web work took the Kunstraub (art theft) policies of the Third Reich as a point of departure for considering a range of issues from collective madness to the nature of memory. “As with much of my work” says Vera Frenkel, “Body Missing walks the edge between documentary and fictional realities…what began as the fiction heard on the videotapes became a reality in the context of the website which followed the Linz project.” It was Hitler’s megalomaniacal dream to create a museum housing the stolen art works in his home town of Linz. 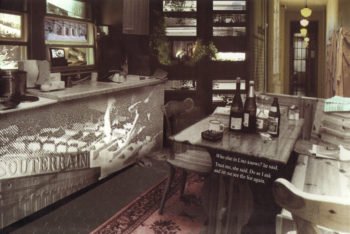 Designed originally as a transient, site-specific work in the context of the Andere Koerper exhibition curated by Singrid Schade (Offenes Kulturhaus Centrum fuer Gegenwartskunst, Linz, 1994), Body Missing has nevertheless found its way to museums and public galleries in nearly a dozen countries, arriving in London fresh from its most recent return to Austria and a major installation of the full six-channel work at the Georg Kargl Gallery, Vienna.

Vera Frenkel’s extraordinary work, Body Missing, has, with great acclaim, transited the world, but few places resonate so powerfully with it that the Freud Museum in London. Here we discover two parallel universes now enmeshed, but not for the first time.

The Freud Museum encompasses Freud’s Museum, Sigmund Freud’s extensive collection of over 2000 objects, the fragments of lost civilisations, gathered together over decades of passionate collecting. These objects, crammed together in Freud’s study, are the crucible of his thought, and the inspiration to a clutch of distinguished contemporary artists.

Enthralled by the discoveries of archaeology, Freud used the process of excavation as one of his favourite metaphors for the process of psychoanalysis. Vera Frenkel has, in a similar process of search and excavation, uncovered the evidence for the accumulation and theft of art intended for Adolf Hitler’s Führermuseum in his childhood home of Linz. Freud’s collection contains items taken from archaeological sites, now regarded as looted from their archaeological context. Hitler’s collection was looted from individuals and museums from the territories conquered by the Nazis, but here the similarities end. Perhaps the most poignant contrast is that Freud’s objects followed their owner into exile. They now give us a glimpse of the source for the complex intellectual life of 19th century Vienna, the civilisation the Nazis destroyed. Despite all the perils they encountered, this collection remains. The looted items for Hitler’s museum are once again dispersed, containing the traces of their lost owners, mute testimony to a period of unparalleled destructiveness in European history. 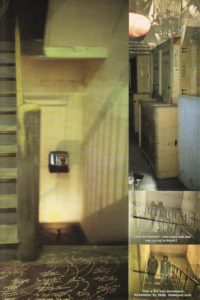 A Note on the Exhibtion
The Work: Body Missing
Excerpts from written descriptions

Taking the Kunstraub (art theft) project of the Third Reich as a point of departure for considering a range of issues, from collective madness to the nature of memory, Vera Frenkel’s Body Missing project has taken a number of different forms, yet its basic elements remain a cycle of six short videotapes, not in DVD format; a group of window-sized images on translucent film drawn from the tapes or their sources (originally set into the windows of the three-story façade of the Offenes Kulturhaus in Linz); two old chairs at each video station, and a governing narrative posted on the wall at station one.

In positioning the viewer between still and moving images, documentary and fictional realities, physical and virtual spaces, Frenkel’s Body Missing sets off a continuous perceptual oscillation that invites inquiry into both the uses of new media and the themes addressed in the work.

From the wall text, we learn that the Transit Bar, an earlier multi-channel work in the form of a functional piano bar, has now been moved fictively to Linz. The bartender tells of overhearing a group of artists and writers at their Stammtisch, speculating on the fate of the body of art discovered to be missing when the Allies opened the salt mines at Alt Aussee, the main depot for circa 6,000 artworks destined for the proposed Hitler Museum.

The fictional account suggests that these artists were considering the possibility not so much of reconstructing the missing art, but of creating a kind of homage or bridge to an absent artist and a missing work. The task was to discover which of the works stolen under Hitler’s clandestine Sonderauftrag (special assignment) Linz had disappeared. There were so many lists: Lists of artworks, collections, truck numbers, insurance policies, storage spaces and depots. The bartender, tired after a day’s work, finds a list of lists suggesting the scope of what is known and unknown regarding the whereabouts of these works, and pastes it in the notebook where she keeps bar ephemera she finds at closing time.

“As with much of my work” says Vera Frenkel, “Body Missing walks the edge between documentary and fictional realities, and as sometimes happens when an artwork tilts in an unexpected direction, what began as a fiction heard on the videotapes became a reality the context of the website which followed the Linz project.” Some of the artists that were in the Andere Koerper exhibition where Body Missing was first shown wanted to take on the challenge of making a work in relation to a piece of lost art. Other artists and writers have joined them since, and the website now includes a dozen homages to missing art, meditations on loss or revisitings of history, with the website itself figuring in the next series of installations. To make it possible to transport the work to the Setagaya Museum in Tokyo, the large transparencies were placed in rudimentary crate-like boxes, described by one view as somewhere between a coffin and an art crate, and dispersed throughout the work along with actual art crates salvaged from each particular site. 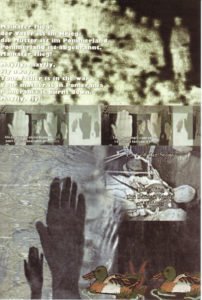 By the time Body Missing was installed in Detroit, it included a set of six 40″ x 60″ photo panels, one for each video station, offering a history of the work and its issues, integrating frame captures from the tapes, website pages, archival imagery and details of earlier installations of the work.

In 1994, the matter of a body of stolen art works missing from the Alt Aussee salt mines was of little interest. Frenkel’s assignment as artist-in-residence was to respond to the city of Linz and its context. The questions surrounding the proposed but unrealized Hitlermuseum seemed to her of greater interest than the chrams of Linzertorte (the famous pastry) or of the Linz-born composer Bruckner. It was only later that the issue of stolen art found itself at the vexed fulcrum of international debate.

In the Spring 2000 issue of its house magazine, the Sigmund Freud Museum in Vienna published a text by museuologist Gottfried Fliedl, to accompany the installation of Body Missing which Dr. Fliedl had planned to install there. For a number of reasons, including perhaps the impact of the hauntings of history, the Vienna exhibition did not take place in the apartments where Freud spent 47 years of his life prior to his exile, and instead will open in the house where he spent the last year of his life; but the text remains a valuable commentary and shed light equally well on the current London exhibition.