You are here: Home Exhibitions Claudia Guderian – Magic of the Couch

Claudia Guderian – Magic of the Couch

Magic of the Couch was displayed on the staircase and video room and ran cocurrently with Nick Cunard’s Head Space. Guderian writes: “The centre of Freud’s last consulting room at his home in Maresfield Garden, is a worn old piece of furniture, covered with a carpet, dating back at least to the year 1891: The legendary couch with the armchair next to it. Together they form the so-called psycho-analytic setting, an invention of Sigmund Freud which had never existed before in the history of mankind. While Freud’s consulting room is a well known site, less is known about the rooms of analysts today. What has become of the couch in the analysts’ daily toil?” 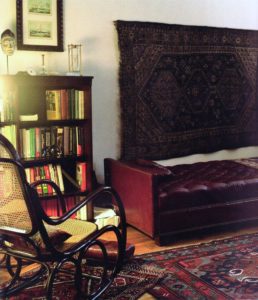 Claudia Guderian is the first to have explored modern consulting rooms with her camera – a sight that many still regard as overstepping the line of privacy. She has visited nearly 100 psychoanalytic consulting rooms and examined their visual and aesthetic impact, their hidden meanings. Her photographs were taking in England, New Zealand, Switzerland, Austria, and Germany, and are published with extensive commentary, under the title Magie der Couch.

A Note on the Exhibition
by the artist

The centre of Freud’s last consulting room at his home in London, 20 Maresfield Gardens, is a worn old piece of furniture, covered with a carpet, dating back at least to the year 1891: the legendary couch with the armchair next to it. Together they from the so-called Psychoanalytic setting, an invention of Sigmund Freud which had never existed before in the history of mankind.

Freud put his patients on a couch and sat behind their heads without eye-to-eye contact for two main reasons:

This is how Freud came to arrange the furniture in this peculiar way. All over the world, analysts now speak about the analytic setting and still use it.

While Freud’s consulting room is a well known sight, less is known about the rooms of the analysts today. Claudia Guderian is the first to have explored modern consulting rooms with her camera – a sight that many still regard as overstepping the limits of privacy. She has visited nearly 100 psychoanalytic consulting rooms. Her photographs were taken in England, New Zealand, Switzerland, Austria, and Germany.

The photos are published under the title Magie der Couch and include detailed specification of the furniture as well as interviews with the analyst concerned. Why did you arrange your furniture the way you did? was answered in many different ways. And a great many analysts approve of the fact that, yes, there is some magic to the couch which helps one remember events that may have been forgotten for decades.

Museum Document
At the tail end of 2004 there were two exhibitions running concurrently at the Freud museum, both the work of photographers, who in their different ways captured something of the form and the spirit of the analytic environment.

The setting was a good one. The work sat alongside photographic records of Freud’s study in Bergasse 19, Vienna, his home for 47 years. In 1938 when he was forced to leave Vienna and settle in Maresfield Gardens, North London, his study was recreated so that he could continue his work and since his death the room remains untouched, for us to observe. The work of recording, preserving and where possible, recreating Freud’s Vienna study was done with reverence and an archaeologist’s attention to detail. This adds to our sense that upon reassembly something beyond the material may be recovered. We are surrounded, as he was, by his extensive collection of relics, imbued with significance from other faiths and cultures. This museum within a museum, creates a sense of layer upon layer of personal and collective meaning.

Dr. Claudia Guderian’s photographs of consulting rooms are added to this mix. Interviews with analysts, detailed recording of rooms and furniture specifications are also printer in her volume Magie der Couch (Kohlhammer, Stuttgart 2004). Unfortunately her books have not been translated into English, though Dr. Guderian is looking for an English publisher. She has taken photographs of analysts’ couches over several years, one hundred consulting rooms in five different countries. This is an ongoing project which she is hoping to extend, investigating the physical and material aspects of the intangible, the analytic experience. 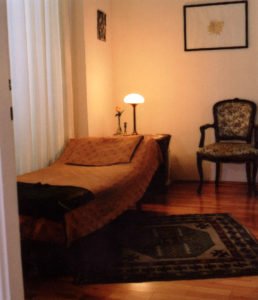 The precision of her photographs lends them beauty and mercy. For me the most striking factor was the strong presence of the absence of the two players, analyst and analysand. The couch and analyst’s chair are captured in a wordless dialogue, often at opposite edges of the frame. The choice of intimate, bounded, interior images echoes the intensity and stricture of the analytic frame itself.

…The overt aim of these two exhibitions was an exploration of the importance of these spaces to both the analyst and analysand, the impact the environment has had on ‘the work’, and I presume, to open up these essentially private spaces to public view. The significance of the details of these environments to the patient is not news. In some cases it seems to the patients that it is the clearest manifestation of the personality of the analyst…