A unique retrospective of Mel Calman, focusing on this most original – and entertaining – aspect of cartoonist’s work.

Mel Calman (1931–1994) was best known for his cartoons on the front pages of The Times and The Sunday Times for many years. He had a gift for the pointed comment, for using his lugubrious, large-nosed, little man to bring a human, small-scale perspective to large-scale issues. Calman was also fascinated by psychiatry, depression, and various sub-species of anxiety and doubt, as ever at his funniest on the darker side of life. 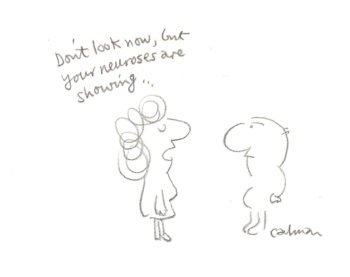 The exhibition includes some of the cartoonist’s lesser known works, including examples from his book Dr Calman’s Dictionary of Psychoanalysis, classic love and marriage cartoons such as ‘But it’s my turn to leave you…’, drawings from the family’s own private collection, and some of Calman’s brilliant double-decker cartoon strips, ‘Couples‘, which he described as “…an attempt to explore the gap between what people say and what they think.”

The exhibition is curated by his daughters, writer and broadcaster Stephanie Calman, and novelist Claire Calman.