You are here: Home Exhibitions Susan Hiller – After the Freud Museum

Susan Hiller – After the Freud Museum 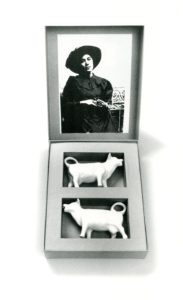 Created for the Freud Museum in 1994 as part of Book Works multi-site project, Susan Hiller’s great work After the Freud Museum, has been a remarkable popular and critical success wherever it has been shown. At MoMA  it was exhibited alongside work by Joseph Cornell, Marcel Duchamp and Fluxus. Sophie Calle and Claes Oldenburg, two other artists with whom the Freud Museum has collaborated, also took part in this show.

It was shown from March to June 1999 in The Museum as Muse: Artists Reflect, an exhibition at MoMA. She had developed the piece over 5 years so that it grew to encompass 50 boxes, and in 1998 it was purchased by the Tate Gallery for their permanent collection.

Susan Hiller wrote in the catalogue:

“On one level, my vitrine installation is a collection of things evoking cultural and historical points of slippage – psychic, ethnic, sexual, and political disturbances. Individual items in my collection range from macabre through sentimental to banal. Many of the objects are personal, things I’ve kept for years as private relics and talismans, mementoes, references to unresolved issues in earlier works, or even as jokes. Sigmund Freud’s impressive collection of classical art and artefacts inspired me to formalise and focus my project. But if Freud’s collection is a kind of index to the version of Western civilisation’s heritage he was claiming, then my collection taken as a whole, is an archive of misunderstandings, crises, and ambivalences that complicate any such notion of heritage.”

Susan Hiller is an artist who makes collections. Her art is curatorial in that it assembles, preserves and documents. What she collects are what she calls “cultural artefacts” […] What is brilliant and original about Susan Hiller is the way she has turned her anthropological eye on to what is familiar […] Hiller’s art seems increasing about the unconscious of our culture, the margins of the collective psyche