Just as Freud cherished this tranquil space in the 1930s, the garden today is still an oasis of calm and an escape from the modern world.

When Sigmund Freud arrived in London in 1938 as a refugee from Nazi-occupied Austria, he wrote ‘We have it incomparably better than at Berggasse and even than Grinzing’, a district of Vienna where the Freud family owned a summer home.  Not only was the house at 20 Maresfield Gardens larger, but the family also had their own garden. Their home of many years in Vienna, at Berggasse 19, was an apartment – and like many city apartments it had no garden to enjoy.

Photos in the Freud Museum’s archive show that they – and their dogs – took full advantage of their treasured garden at all times of year. The weather on 6 May 1939, Freud’s 83rd birthday, was fine enough for the celebration to take place in the garden.

As spring 1939 approached, after the harsh winter of 1938, the garden could once more be enjoyed. Ernest Jones, psychoanalyst and family friend, wrote that Freud took particular delight in the almond tree in the front garden. This tree was the inspiration for Stephen Spender’s World War II poem ‘Almond Tree in a Bombed City’: 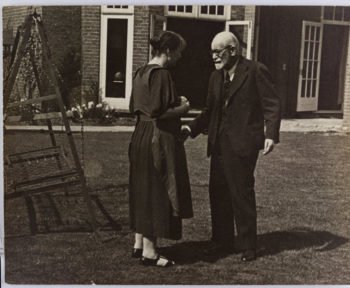 Anna and Sigmund Freud in the garden at 20 Maresfield Gardens, Autumn 1938.

In the burned city, I see
The almond flower, as though
With great cathedral-fall
Barbarian rage set free
The angel of a fresco
From a cloister wall.

The flesh-petalled tree,
Angel of Fra Angelico,
With folded hands, bended knee
And arc of eloquent wing
(See the plumes like tongues grow
Promising the rainbow!),
To our world of ash will bring
Annunciation of Spring. 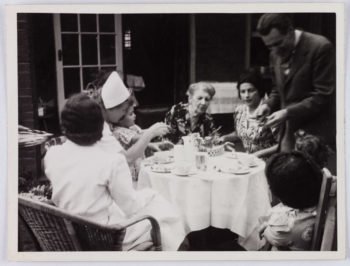 Martha, Ernst and Lucie Freud in the garden at 20 Maresfield Gardens, 1940s

By April 1939, Freud was taking full advantage of having such a beautiful garden and enjoying the flowers he loved so much. As Freud’s health dwindled and his life moved to its final stage, he was confined to his study where a bed was set up for him facing the French windows, so that he could still look out onto his beloved garden.

After Sigmund’s death, we know that Anna Freud and Dorothy Burlingham continued to enjoy the garden’s lawn, flowers and trees. Anna’s library contains a collection of books and magazines about gardening, including rose catalogues and nursery brochures. 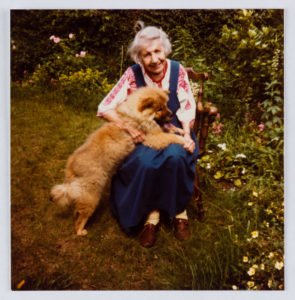 Anna Freud and Jo Fie II in the garden at 20 Maresfield Gardens, c.1980

The garden was much loved by both Freud and Anna. It is still meticulously maintained and contains many of the same plants of which the Freuds were so fond. Some of the plants are the very same stock the Freud family planted. The roses that surround the house, the clematis, the hortense, the plum and the almond trees were all present in 1938. As were the terracotta flower pot, containing a red geranium (with Anna Freud’s trowel beside it), the circular flower bed to the right of the garden, and the curved bench and tables on the shaded left-hand side of the garden. The large pine tree at the rear of the garden was knee-height when Anna first had it planted.

The Museum today keeps Freud’s garden as close to the original layout and planting as possible. However there have been some additions. Visit the garden today and you will find a plaque in honour of Josefine Stross. Stross came to England as Freud’s nurse in 1938.  She had grown up amongst the friends and associates of Sigmund and Anna Freud and had an early interest in paediatric medicine and psychoanalysis. When Anna Freud opened the Jackson Nursery in 1937 for some of the poorest children in Vienna, Stross became its medical officer. There is also a memorial plaque for Bobby the Freud Museum dog, buried in the garden in 2010.

In 2016 the Museum was given the sculpture Self (Engravers MT) by Mark Wallinger. Wallinger made a series of three-dimensional self portraits using the letter I, in different fonts and heights. For the Freud Museum, a fitting context in which to explore representations and meanings of the self, he chose the 1924 font Engravers. This sculpture is Wallinger’s height, set on a large plinth.

Self (Engravers MT) by Mark Wallinger, 2016. Courtesy of the Artist. Purchased with the Assistance of the Art Fund.

Today the garden is enjoyed by visitors and staff alike. From summer parties and private hire events, to education groups and workshops, the garden is an integral part of the Freud Museum London. Just as Freud cherished this tranquil space in the 1930s, the garden today is still an oasis of calm and an escape from the modern world.

Find out more about gardening and mental health in ‘The Well Gardened Mind’ available from the Freud Museum Shop. >>