You are here: Home Blog How did Freud celebrate his birthday?

How did Freud celebrate his birthday?

Notoriously unenthusiastic about the event, as Freud’s fame grew he only received more attention and adoration on the big day.

Early letters show a subtle enjoyment of the gifts a birthday brought. 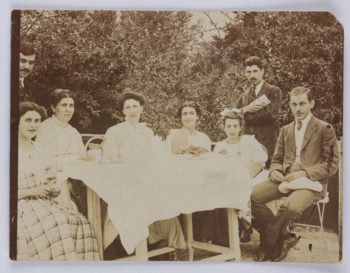 In 1885, a year before his wedding to fiancée Martha Bernays, he wrote to thank her for the biscuits, writing set and prescription block she had sent him.

This predicted his future career, as he wrote “I won’t begin using it yet, it is too beautiful, not till I start my own practice.”

But as he aged, the contents of his letters reflected his concerns.

In 1922 he wrote to author and dramatist Arthur Schnitzler that he was “approaching the limit of life and may soon expect to see the end of the fifth Act of this rather incomprehensible and not always amusing comedy.”

Into his 70s, friends and admirers continued to send him gifts and greetings.

“There was of course no way of evading the nonsense of the birthday. I am stifling in roses, orchids and telegrams as in Vienna. There are fewer visitors there. Predominant is a rose-bunch from Eitingon, I believe there are 74, others think: 120. The nicest thing is a poem in Jofi’s name, from Anna of course, in the company of a live little tortoise.” 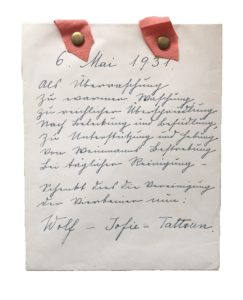 The poem Freud refers to was signed by the family dog, Jofi. Freud’s daughter Anna and son Martin had a tradition of writing poems on their father’s birthday, ascribing their composition to their dogs.

The dog poems began in 1926, with Wolf, Anna’s German Shepherd. The poems were tied with a ribbon around the dogs’ necks.

In 1930, since Freud was away from the family and their dogs, it was apparently left to a tortoise to deliver the poem. It read:

“Jo Fie who leaps / and through doors escapes / who slips the leash / and fights with enemies / who stretches out in greeting and / licks your hand / sends herewith / on May the sixth / a symbol that / should indicate / how she wants to change / and act more restrained: / wants to scarcely move when / doors are opened / does not want to bark nor scrap / nor run or leap / hardly wants to drink or eat. / So speaks Jo Fie sad at heart / sorry that we are apart.” 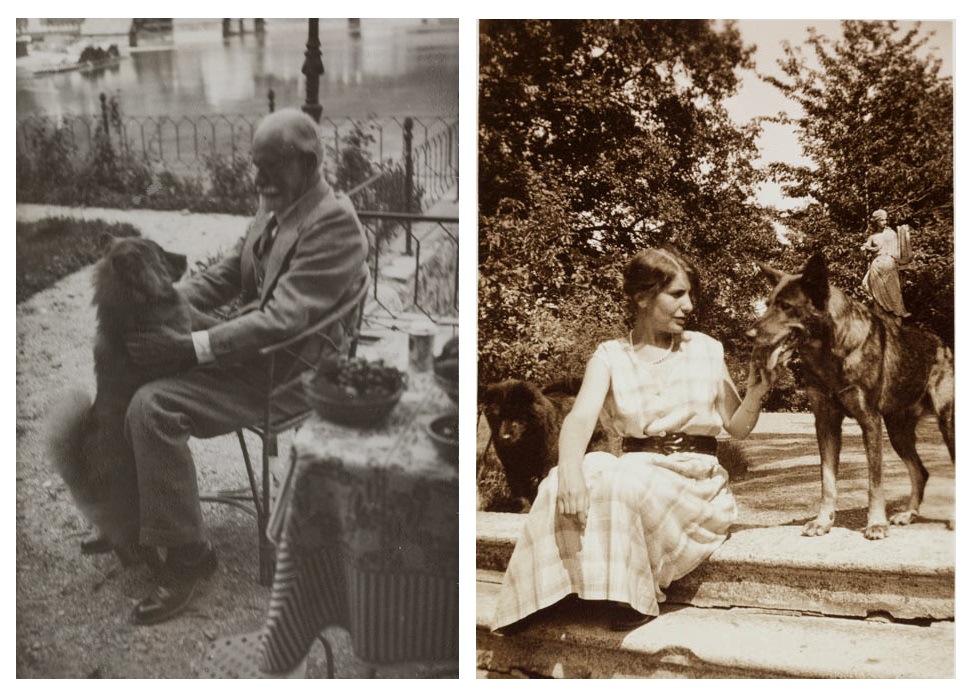 The following year, on 6th May 1931, Freud had just returned home after a spell in a sanatorium.

He was still weak, so only family took part in the celebrations.

He wrote to his friend Max Eitingon: “I was very glad to be home on my birthday, it was easier and nicer for my harrassed nurses. In all the day passed cheerfully …”

Among the gifts were a Greek vase from Marie Bonaparte. Freud loved it,  writing to her: “…it is a pity one cannot take it into one’s grave.”

It’s this vase, apparently, which now holds his ashes at Golders Green crematorium.

1931 was also the year that Freud received the beautiful figure of Vishnu as a gift from the Indian Psychoanalytical Society for his 75th birthday.

However it didn’t arrive until December of that year, as it was commissioned and made especially for Freud, which took longer than expected. 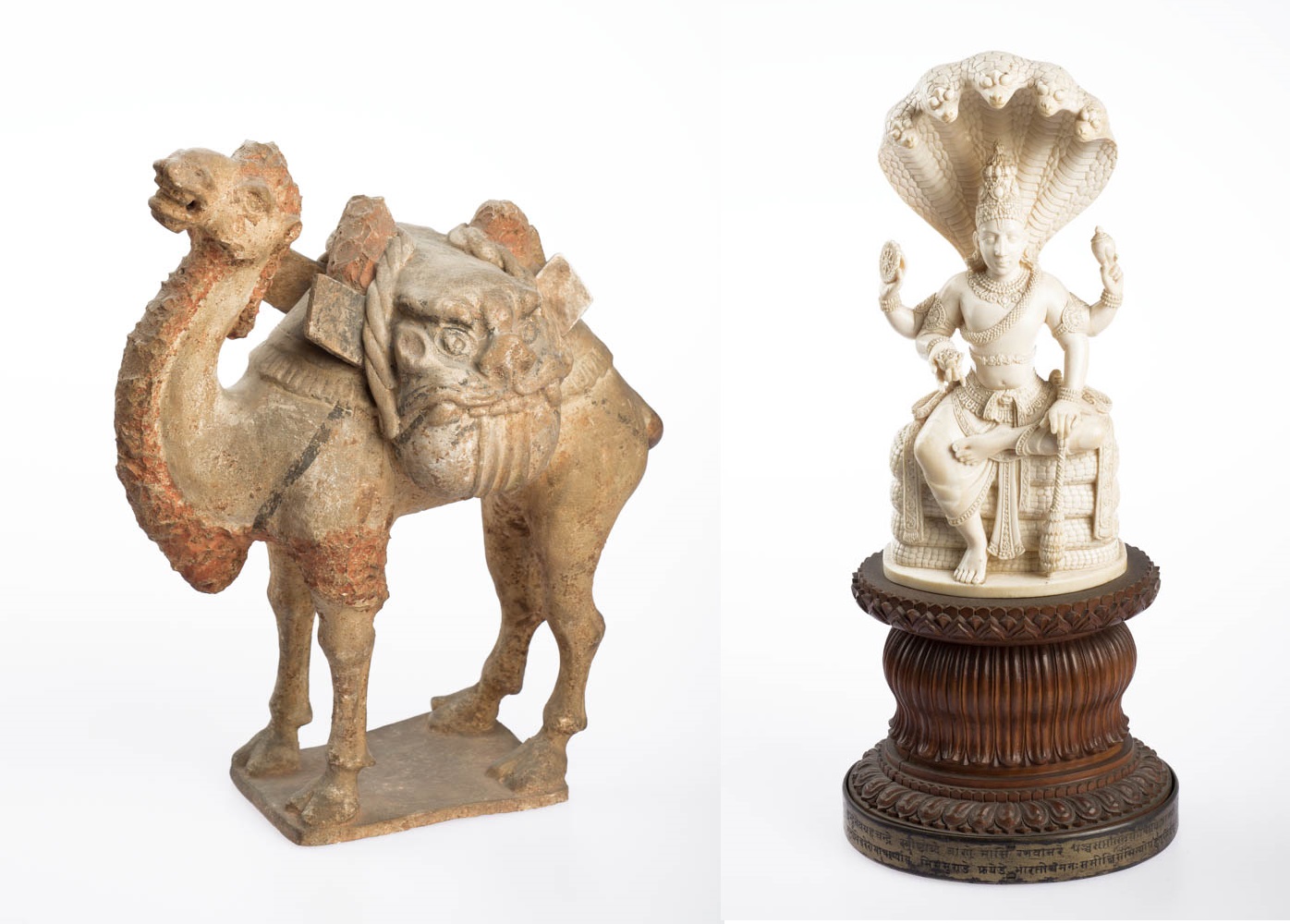 Birthday gifts: T’ang dynasty camel from Marie Bonaparte in 1933 and statuette of Vishnu from the Indian Psychoanalytical Society in 1931

In 1932 Freud was too ill on his birthday to have a celebration.

This was fine for him, since he always shied away from celebrations of the day.

“Your absence from my birthday this year – undesired as its cause is – will at least enable me to pass the day as I have always wanted to, that is as an ordinary weekday. In the morning a visit to Kagran with the dogs, in the afternoon the usual visit to Pichler [his doctor], 4 hours of analytical work and a harmless game of cards in the evening.”

He wrote to Eitingon, perhaps with a touch of humour:

“Almost everyone who congratulated me on my birthday this year will wait in vain for thanks and acknowledgment. Through this technique I want to train them not to do it again on the next ‘occasion’.”

“It was good news to hear that your Father is doing well. He would be horrified if he heard how widely the news of this eightieth birthday is spreading over the world and what a number of suggestions are being made in this connection.”

But word did reach Freud: “The rumours that reach me about preparations for my birthday annoy me as much as the newspaper gossip about a Nobel prize”, he wrote to Marie Bonaparte. 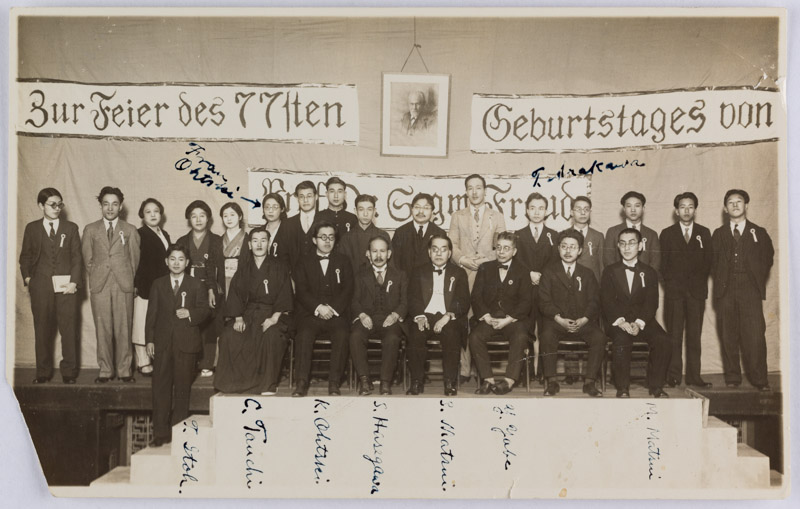 Japanese psychoanalysts gather in Tokyo for a special performance for the 77th birthday of Sigmund Freud in 1933.

Despite Freud’s continued attempt to avoid them, honours and congratulatory messages flooded in from all over the world, including from Thomas Mann, H.G. Wells, and Romain Rolland.