You are here: Home Blog Freud at Home: At His Desk

Freud at Home: At His Desk

For Freud, home was always a live/work space. His study was an oasis of calm and his desk was at its centre. 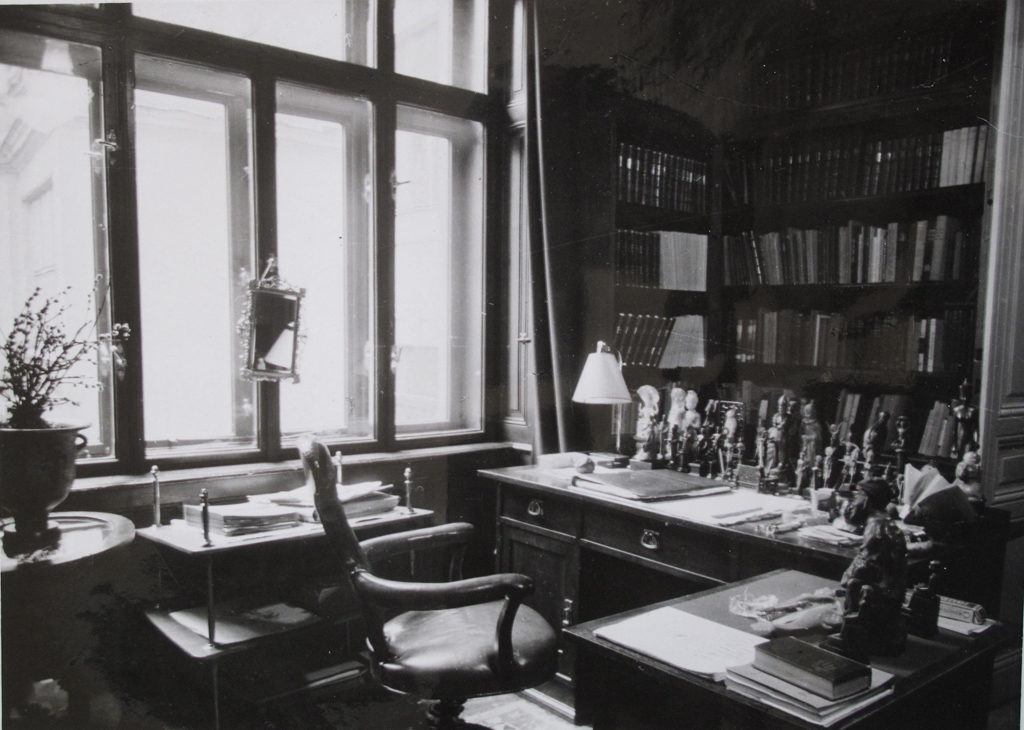 Freud’s desk is a work of art in itself, crowded with antiquities, writing tools, smoking paraphernalia, and various papers. It appears to be an ever-changing beast: depending on what Freud was working on, reading and which antiquities were new and in favour, the desk reflected his state of mind.

In Berggasse 19, Vienna, where Freud lived and worked for decades, his study was a room dedicated to reading and conversation within the wider family home. His decorating differed from the rest of the domestic space, with antiquities crowding every surface and textiles lounging on floors, tables and walls. The room had an air of peaceful academia and hushed confession.

At the centre of this all was Freud’s desk.

Where is Freud’s desk from?

Sigmund Freud’s desk is from Vienna, made by furniture maker Siegmund Spitz. It is made of a heavy dark wood, with a red felt top. Three heavy drawers support the desk on each side with a shallow drawer in the centre.

The maker’s label appears on the right hand pedestal’s door: ‘Siegmund Spitz / Atelier für Wohnungs-Einrightung / Wien, IX. / Garnisongasse 10’. Spitz’s atelier for home furnishings was just one street away from Freud’s home. The desk is nothing unusual – its design is a classic 19th century style pedestal desk.

How Freud used his desk

A desk is naturally a place to work from, but Freud’s desk was so much more. As Freud returned to his desk after multiple analytic sessions throughout the day, he was met by an audience of faces. Inanimate and silent, the rows of statuettes were Greek, Roman, Egyptian and Chinese, and gazed upon him from centuries and millennia past. A more practical person may have cleared this space for papers, pens, books and other essentials for writing. But for Freud his bronze and ceramic gallery was a key part of his process.

Freud surrounded himself with artefacts of great beauty and value, but they were also tools of thought, the kitchen utensils of his imagination.”Marina Warner, 20 Maresfield Gardens: A Guide to the Freud Museum

Though these figures did not share their dreams and neuroses with their observer, they certainly contributed to his work. Many of these characters from antiquity appear in Freud’s theories: Athena, Oedipus, Eros, Venus. They inspired him in his exploration of psychoanalytic theories and in his writing process. Some objects on the desk relate to the act of writing itself: a jade scholar screen designed to inspire calm in the scholar; the baboon Thoth, lunar god and patron of all things intellectual, particularly writing; and Athena, goddess of wisdom and war, balancing sound intellect and decisive action.

Sigmund Freud’s desk in his study at 20 Maresfield Gardens, London, 2019

When the Freud family came to London in 1938, fleeing Nazi persecution, they had the exceptional good fortune to be able to bring almost all their belongings with them. And this included the desk. Today, Freud’s desk remains in his study, appearing largely as he left it. After Freud’s death, Anna Freud became guardian of her father’s legacy as well as his possessions. The study was kept almost exactly as Freud left it – not as an untouchable shrine, but as a living memorial to Freud’s life and work.

Today, Freud’s favourite antiquities continue to hold court from the unique vantage point of the dark velvet-topped desk. (Only his favourites made the cut and remained on the desk after their initial purchase). They are joined by a number of other items: cigar boxes, ashtrays and a matchbox to maintain his smoking habit; papers atop a large leather portfolio with pens and a marble letter opener for correspondence; and of course Freud’s wire-rimmed spectacles. 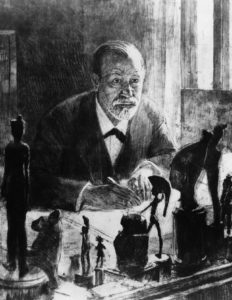 Hidden from view are some more unusual items. A Montblanc fountain pen might be a perfectly normal item to find in a desk, but a clothes peg? One can be found in the desk’s central drawer. It was used by Freud after a particularly bad operation, part of his treatment for cancer in his mouth. Freud was determined to continue to smoke his beloved cigars and needed this clothes peg to do. He used the peg to keep his jaw open enough to smoke.

Also in the centre drawer is a box of Tarock cards, a traditional Viennese card game. Freud played a regular game every Saturday evening with three friends. The cards are a rare insight into Freud’s limited leisure time. He usually played with friends from outside his psychoanalytic circles, guaranteeing no ‘shop talk’ while the game was played.

Everything on, and in, Freud’s desk paints a picture of who he was, what he valued and how he worked. The items on the desk, from rare antiquities to practical matchboxes, allow us a glimpse into the past. Peering into drawers and leafing through manuscripts in a unique and priceless way to get to know a person’s life and work, and the staff at the Freud Museum London treasure the opportunity to do so. Whether we are rifling through the archive, dusting Eros’s wings or preparing to open the shop to visitors from all over the world, we appreciate every moment we get to spend in Freud’s house. We look forward to the moment we can do so again. 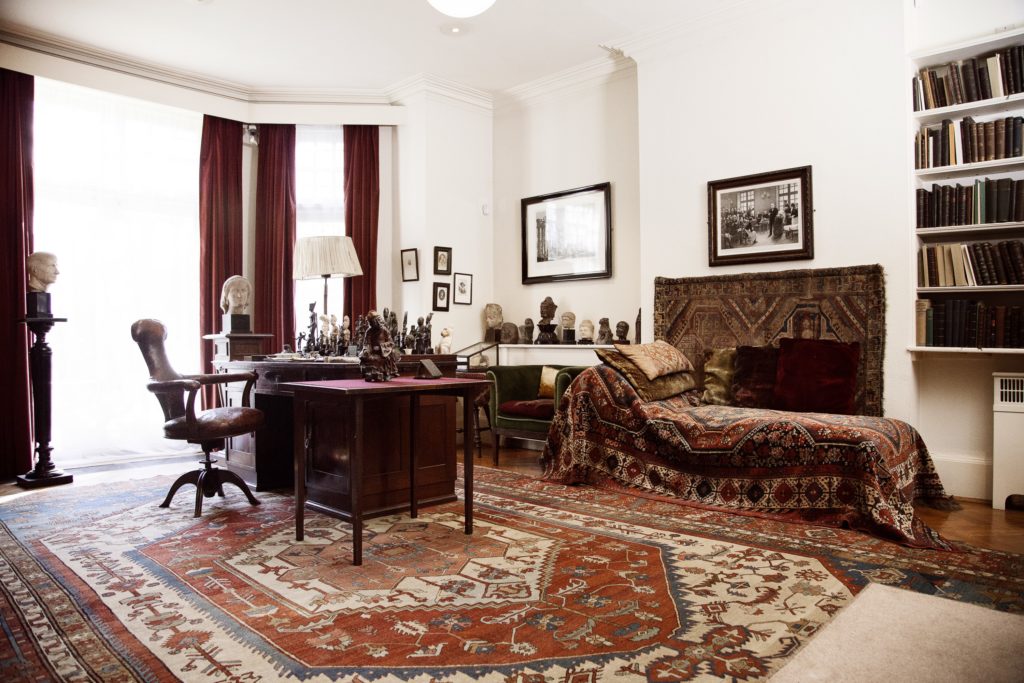