You are here: Home Blog Freud at Home: Sigmund and Anna’s Studies

For Freud, home was always a live/work space. In this new series we’ll be looking at where Sigmund Freud and his family lived and worked. 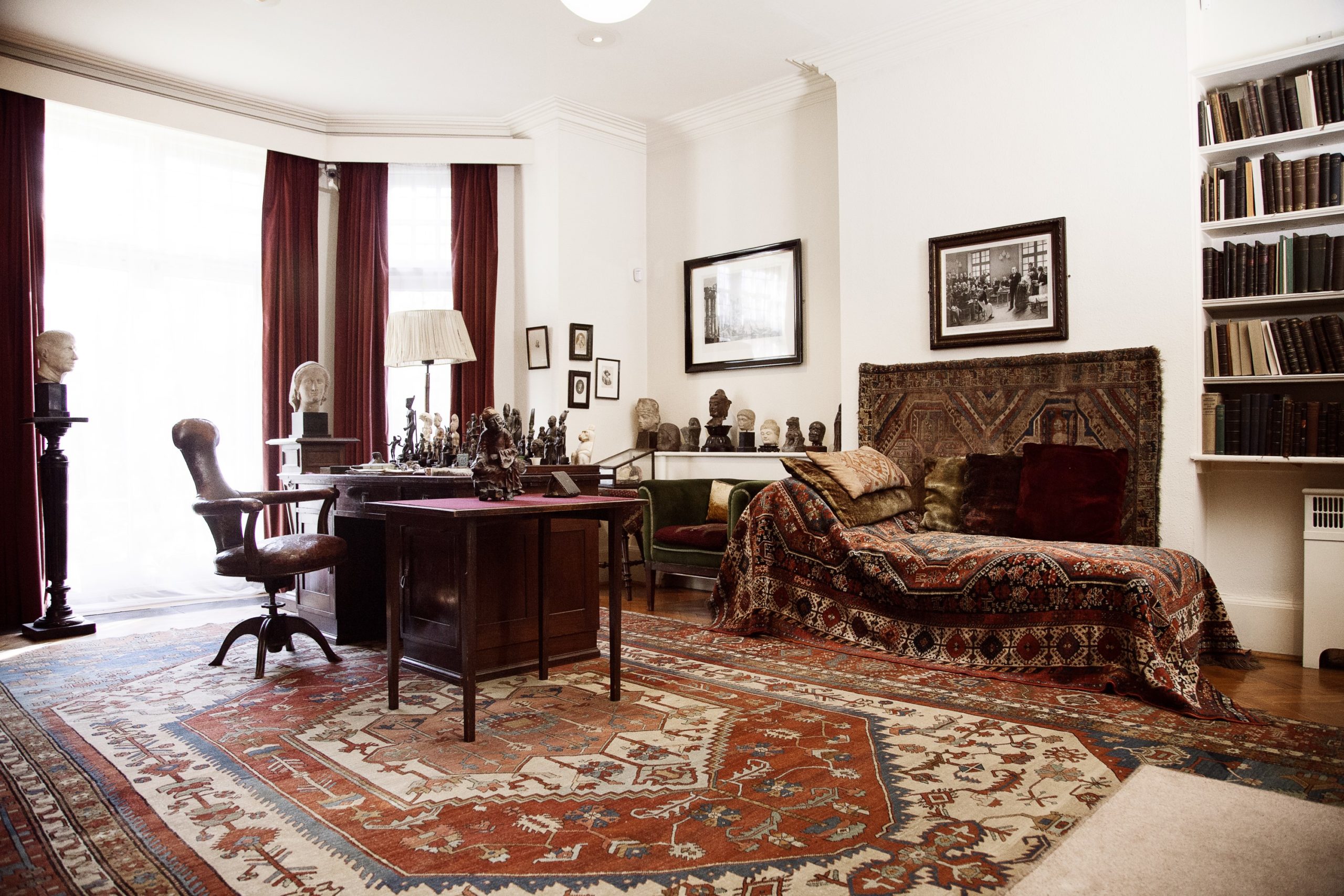 Like many of us are now finding out, working from home isn’t always easy. Keeping the divisions between one’s professional life and family life is tricky! But for both Sigmund and Anna Freud, working from home was a normal part of their daily lives. They both had studies and consulting rooms in their Vienna apartment and London house. But looking at the two work spaces side by side, we can see clear differences in their decorating and therapeutic styles.

Psychoanalysis in its infancy, Vienna 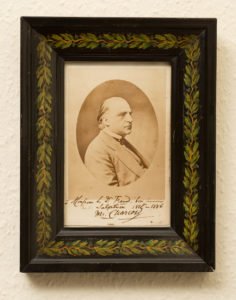 A photograph of Charcot hangs in Freud’s study

Freud began collecting antiquities in the mid-1890s. A decade earlier he had been studying in Paris at the famous Salpêtrière Hospital under Jean-Martin Charcot.

Freud was overwhelmed by Charcot, who was ‘always stimulating, instructive, and splendid.’[1] Professionally, Freud was greatly impressed by his new mentor, and wrote to his fiancée Martha that he was ‘one of the greatest physicians, a genius and a sober man, [who] simply uproots my views and intentions.’ His influence is clear when Freud writes: ‘that no other human being has ever acted on me in this way I know for certain.’[2]

He was mostly speaking professionally, but Charcot’s influence also extended to Freud’s study itself. Charcot was a collector of art and antiquities, and his study was testament to this. Seeing the vast array of treasures in Charcot’s home, Freud wanted to emulate his mentor in more than academia. It would be a decade until he had the money and ability to begin his collection, but when Freud started amassing antiquities it became an obsession. 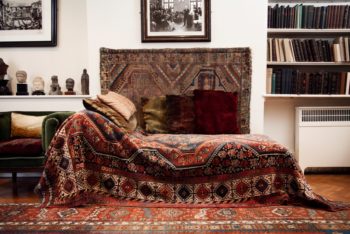 Freud’s couch was a present from a patient, a Madame Bevenisti, around 1890. It’s not known what Freud treated the grateful patient for or why she chose this item to gift him. Indeed, little is known about the story itself outside a brief note made by Marie Bonaparte, now in the archives of the Freud Museum London. The couch itself is plain, and the richly detailed Qashqa’i carpet on top was added by Freud.

Despite its modest construction, once covered in the carpet and placed at the centre of Freud’s consulting room the couch gave Freud some gravitas and also gave his patients a non-medical bed to lie on.

Freud developed a technique to circumvent blocked (or repressed) memories by letting his patient say whatever came to mind. This was called ‘free association’ and required the patient to be totally relaxed. Of course, a natural aid to such a state was to lie down on the couch. Once supine, quiet and suitably relaxed, words and thoughts could flow freely.

As the only one of Freud’s six children to follow him into psychoanalysis, Anna was always keen to impress her father. The two were close and were keen correspondents throughout their lives. However, Anna’s consulting room indicates a clear difference in their styles of living, as well as analysing patients. 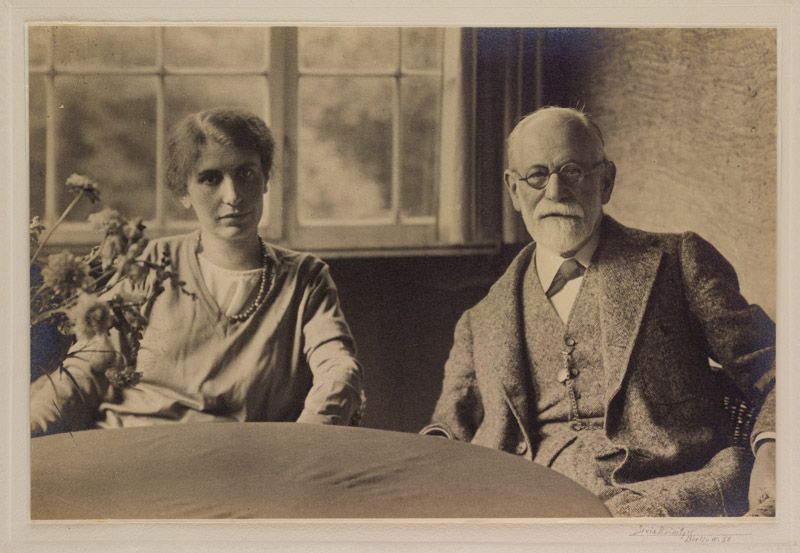 Anna and Sigmund Freud in Berlin, 1929

Where Sigmund Freud analysed adult patients, Anna mainly worked with children. Although others had analysed children before Anna, she was the first to systematise a method. She believed child analysis should stick to the basic theories of psychoanalysis, but should be a distinct form of therapy. 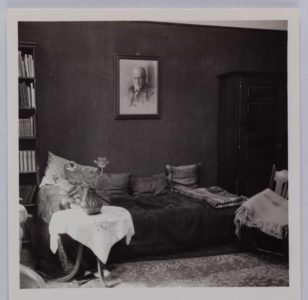 Anna was sensitive to the fact that that unlike adults, who usually sought analysis voluntarily, this was rarely the case with children. Her first stage of analysis was intended to gain the child’s attention and trust before conducting any therapy.

She recognised that children struggle to stay still and focused. Instead, she allowed her child patients to move about completely freely in the treatment room.

A room crowded with antiquities – even if this had been Anna’s personal taste – would not have been conducive to making children comfortable and allowing them free rein in the room.

As much as Anna was committed to safeguarding her father’s legacy (you can see his portrait above her psychoanalytic couch in her study) this did not mean copying his style.

Anna Freud hardly ever used a psychoanalytic couch when working with children. For Sigmund Freud, the couch was the centre point of his study and key to his style of analysis. Where Sigmund would sit in his green tub chair behind his patients’ reclining figures, Anna would encouraged her young charges to use the drawing materials she laid out. The results of both styles were regarded as important means of expression: the spoken word or the revealing drawing.

Anna’s rooms were plainer and more utilitarian than her father’s. She had very few antiquities on display, although a few gifts from Sigmund can be seen here and there. Her rooms evoke a sense of practicality: carpets on the floor for children to play on, photos of family and friends, and art in the form of a watercolour of her holiday home in Walberswick. 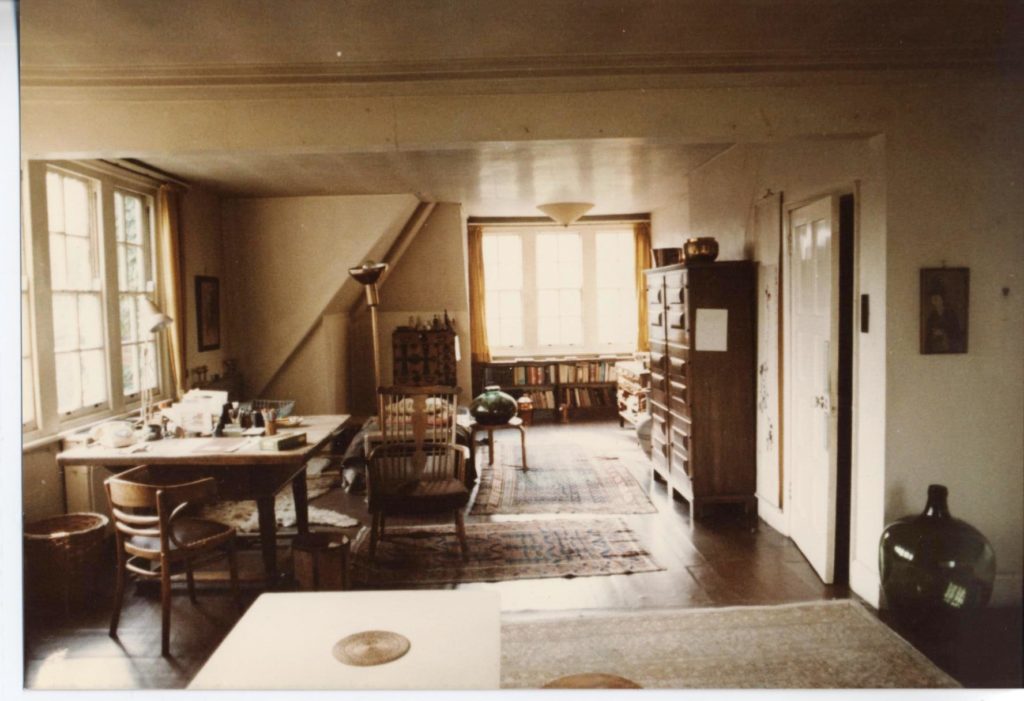 Both Sigmund and Anna’s “working from home” styles grew and evolved over years of fine-tuning. In the current situation, many of us are finding our what works (and doesn’t work) for us in our new work environments. Our series Freud at Home will be looking at how Freud and his family lived and worked in their domestic space. We’ll be exploring both Sigmund and Anna Freud’s professional lives, their family dynamic, the furniture that filled their rooms, and what they did when they really needed to escape the four walls of home!