You are here: Home Blog Spotlight on the Archives: Josefine Stross

Spotlight on the Archives: Josefine Stross

Sigmund and Anna Freud's archives are large, but there are many other lesser-known figures in the archives of the Freud Museum. 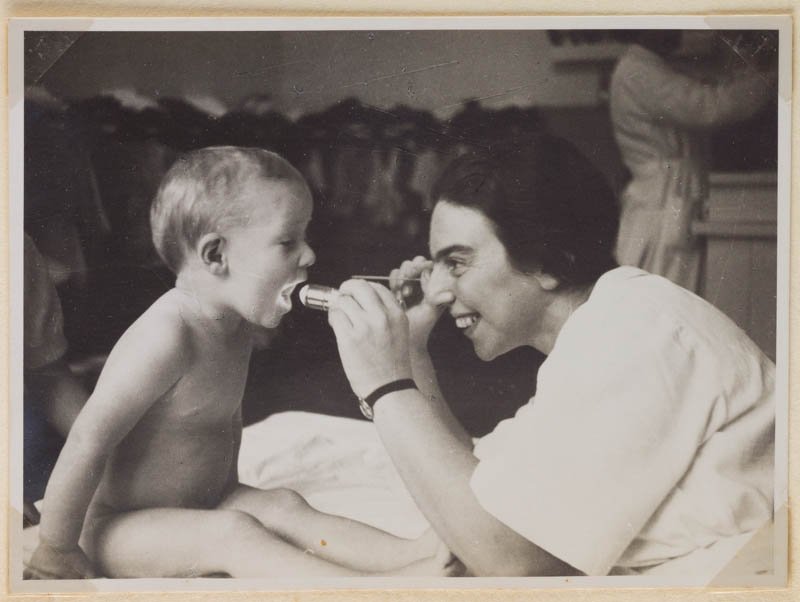 The recent re-cataloguing of the Freud Museum London archives has shone a spotlight on a number of lesser-known figures. Here we explore Josefine Stross, friend and personal doctor to Sigmund and Anna Freud.

Josefine Stross was born in Vienna on 1 June 1901 into an influential Jewish family. Her mother came from Czechoslovakia where her family owned textile mills. Her father Emanuel, who died when Josefine was only ten, was a lawyer. 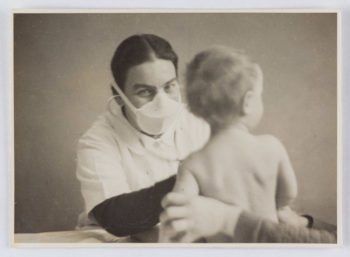 Josephine Stross with a child during an examination at the Jackson Nursery, Vienna, 1937 [IN/3456]

Josefine was educated at the Schwarzwaldschule for Jewish girls. From there she went to medical school and qualified as an MD in Vienna in 1925. Between 1926 and 1931 she worked at the Karolinen-Kinderspital (a children’s hospital), qualifying as Specialist in Paediatrics. In 1928 she published a paper on treating coeliac disease in children based on a diet of bananas – ‘Coeliakie-Behandlung mit Bananen’. Family legend has it that she personally went to the market to order crates of bananas for the hospital.

Josefine’s medical training also encompassed ‘social medicine and medical welfare’. After leaving the hospital she not only had private patients but also a civic post as a paediatrician for school and welfare clinics. She also acted as the physician to her former school, which was closed down by the Nazis in 1938.

Josefine became friendly with Anna Freud in 1923. In 1933 she underwent analysis and after training at the Vienna Institute became an Associate Member of the Viennese Psychoanalytical Institute. From 1936 onwards, Josefine was not only an experienced and highly regarded paediatrician, but also a trained psychoanalyst. In her assessment of children and their problems or needs was able to consider both medical and psychological factors in depth. 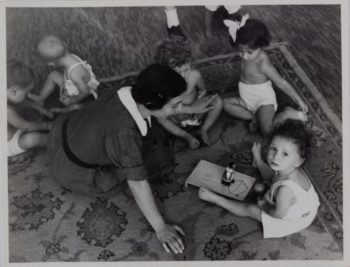 Close collaboration with Anna Freud and Dorothy Burlingham began when Edith Jackson, the American psychoanalyst, founded the Jackson-Krippe in Vienna in 1936, run by Anna Freud and Dorothy Burlingham. Josefine was appointed paediatrician. The purpose of the Krippe, as she wrote, was ‘to study the development of pre-nursery children (aged 1 – 2 1/2 to 3 years) i.e. eating, toilet training, aggression and peer communication, without the usual restrictions and plodding’.

The children came from families hit by unemployment, and Josefine made a point of keeping in close touch with the mothers – she emphasised the importance of ‘treating’ child and mother.

The Krippe gained a wide reputation and was a model for developments in pre-nursery education. Josefine continued to maintain her private practice and to function as a school physician. In addition, following her psychoanalytical training, she became counsellor to teachers and school children at The Settlement, Vienna, another influential centre for developments in education and child care. 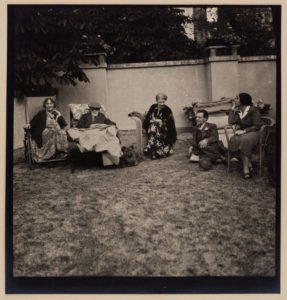 Marie Bonaparte, Sigmund, Martha and Ernst Freud and Josefine Stross at Marie Bonaparte’s house in Paris during the Freuds’ journey to England, 1938 [IN/0092]

A curriculum vitae written by Josefine well after the war records laconically, ‘June 4, 1938 Left Vienna’. Josefine provided medical care for Sigmund Freud during the journey to England, and continued in her role as personal physician to him once he and Anna were established in Maresfield Gardens.

It was necessary for Josefine to reestablish her career in London and she became a post-graduate student at the West London Hospital. She was awarded her diploma in January 1940 and in May 1940, with permission from the Home Office, Josefine was once more functioning as a paediatrician. She quickly established a private practice and by 1942 she held posts as Clinical Assistant (paediatrics) at the West London Hospital and the Eveline Children’s Hospital. Inevitably she was also a key figure in the Hampstead Nurseries for homeless victims of the air raids.

A constant source of worry for Josefine in London was the fate of the family and friends left behind in Austria and Czechoslovakia.

Sigmund Freud personally spoke up for Josefine’s brother Fritz and his wife Lona, who were granted visas for England. A visa was finally obtained for Josefine’s mother Marie Stross – but too late for her to leave Austria before war was declared. In 1945 official confirmation came that Josefine’s elder sister, Grete, and her mother had died in a concentration camp.

After the war Josefine continued with her work in the hospitals and the Hampstead Nurseries. She spent thirteen years as paediatrician to a group of children who had been flown to England from Terezin, a transit concentration camp. Her reputation as a paediatrician also ensured that her private practice was thriving. In 1957 she was a founder member of the Well Baby Research Group and paediatrician to the Well Baby clinic. Her work in this field earned her wide recognition.

From the 1940s onwards Josefine also acted as personal physician to Anna Freud and Dorothy Burlingham, both of whom had recurrent problems with their health.

She finally retired from the Hampstead Clinic in July 1983, at the age of 82, an occasion celebrated with a farewell luncheon.

The Josefine Stross papers were donated to the Freud Museum London by a relative of Josefine Stross in 2005. They contain five distinct parts: Correspondence, mostly with Anna Freud and Dorothy Burlingham [JS/01]; professional papers [JS/02]; a collection of lectures and publications [JS/03]; personal papers [JS/04]; and photographs [JS/05]. 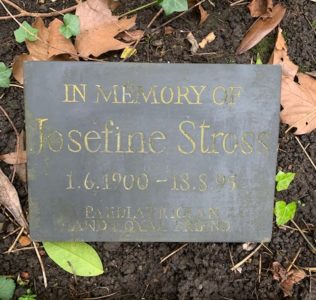 The garden of the Freud Museum London, 2019

The garden of the Freud Museum provides a tranquil escape from the busy London streets for many visitors. Freud loved spending time in his garden, particularly after a life lived in an apartment building. Today, the garden remains largely how it appeared in Freud’s lifetime. However there is one notable addition: a plaque commemorating Josefine Stross and her relationship with the Freud family.  The plaque describes Stross as a “paediatrician and loyal friend”, and was installed shortly after her death in 1995.

Posted in Curator's Blog by Bryony Davies on December 10th, 2019. Tags: Spotlight on the Archives