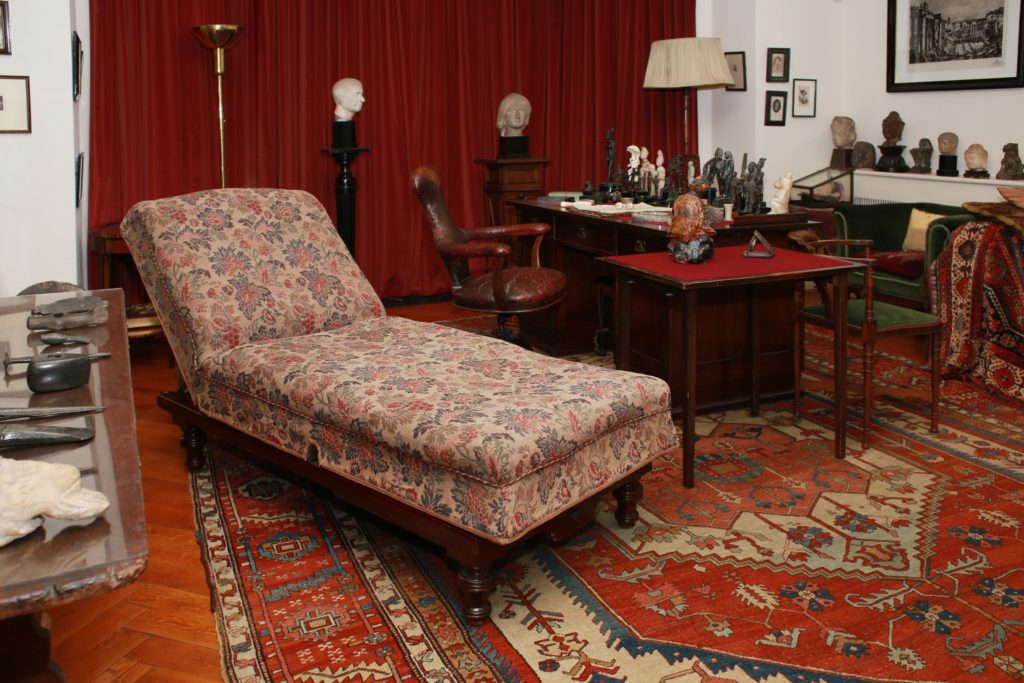 It may not be widely appreciated that, on Saturday, 23rd September, 1939, Sigmund Freud died, not in a bed but, rather, on a couch.

Freud did not pass away on the famous psychoanalytical couch but, rather, on a special “invalid couch”, installed in his study.

As this less well known couch has remained in storage at the Freud Museum London, few psychoanalytical historians have ever seen Sigmund Freud’s actual death bed. A close scrutiny of this “other” couch might seem rather fetishistic, but it may be of some interest to contemporary psychoanalytical clinicians to learn more about Freud’s final moments.

Sigmund Freud arrived in London on 6th June, 1938 – a refugee from the Nazis – but he did not take occupancy of 20 Maresfield Gardens, in London’s Swiss Cottage, until 27th September, 1938, having spent the previous months in Primrose Hill at 39, Elsworthy Road. In his new home, parallel to the Finchley Road, Freud ensconced himself in the combined consulting room and study on the ground floor, but he slept in a small bedroom on the first floor with Frau Professor Martha Freud, his devoted wife. As Sigmund Freud, then 82 years of age, struggled to ascend or descend the spacious staircase (Berthelsen, 1987), his son, Ernst Freud, a skilled architect, arranged for the installation of a lift which transported the father of psychoanalysis from one level to the next (Roazen, 1993).

He would have to be cared for full-time in his more spacious and brightly-lit, book-lined and antique-strewn study.

In spite of his illness, Freud worked vigorously during the final months of 1938 and during much of 1939. He even treated a small number of psychoanalytical patients and continued to write. Freud also spent time lounging in his garden on a special hanging couch. However, his cancer progressed, and he became increasingly necrotic (Schur, 1972). By 1st August, 1939, Freud (Molnar, 1992) ceased clinical practice entirely, and not long thereafter, it became clear that he could no longer be shuttled upstairs in the lift, and that he would have to be cared for full-time in his more spacious and brightly-lit, book-lined and antique-strewn study. This extraordinary room had now become a veritable sick bay (Jones, 1957; Schur, 1972).

Dr. Ernest Jones (1957, p. 245), Freud’s colleague and, ultimately, biographer, noted that the father of psychoanalysis benefited from having his sick bay downstairs, in the study, because it afforded a clear view into the garden and permitted him to gaze at his “beloved flowers”; whereas his upstairs bedroom, by contrast, looked out onto the road. Dr. Max Schur (1972, p. 527), Freud’s physician, reported that, at one point, in September, 1939, Freud had to be moved to a so-called ‘ “safe” zone’ at Maresfield Gardens, to protect him from potential bombings, away from the garden windows and into the centre of the room (Young-Bruehl, 1988).

The renowned psychoanalytical couch, which Freud had brought to London from Vienna, and which he had used in his practice for more than fifty years, would not have provided the dying man with sufficient orthopaedic support; hence, the family purchased a special “invalid couch” from J. and A. Carter’s, a well-known company, based on Great Portland Street in Central London, which specialised in the manufacture of furniture for the aged and the disabled.

J. and A. Carter’s supplied the Freud household with a suitable invalid couch, some 224.5 centimetres in length, 54 centimetres in height, and 77 centimetres in width, consisting of a dark, mahogany frame with turned feet, and an upholstered base attached to the upper side of the frame.  This special invalid couch, one of the manufacturer’s many types of patient furniture, also contained a special ratchet which permitted the head end to be lifted.  Freud’s new bed boasted a silk-trimmed seat and a cotton fabric covering, decorated with a floral pattern, and trimmed with blue, pink, and green silken cords on the seat and on the back. 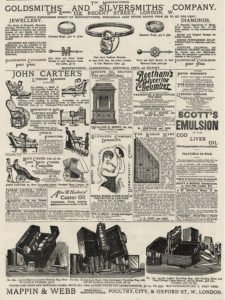 The firm of J. and A. Carter’s, originally established in London circa 1880 by one John Carter, had become leading suppliers of patient furniture, manufacturing not only invalid beds and chairs and appliances but, also, hospital surgical furniture, bath chairs, and ambulances. Headquartered, initially, at 6-A, New Cavendish Street, John Carter’s company, which eventually came to receive a royal warrant, also produced revolving bed-tables, wheelchairs, invalid carriages, hand-lifters, stretchers, and perambulators. Furthermore, Carter created a patented “literary machine” – essentially a bookstand designed to help reduce the orthopaedic strain on Victorian scholars who had become fatigued from holding heavy tomes! Eventually, John Carter amalgamated his business with that of Messrs. Alfred Carter of Holborn Viaduct and Shoe Lane, and they came to trade as Messrs. Carter and, later, as J. and A. Carter.

The particular type of invalid couch, which had now come to serve as Sigmund Freud’s bed, had first become popular during the Regency period; and from the 1830s onwards, it would be fitted with springs and other mechanisms, which allowed for the adjustment of the patient’s bodily position (cf. Kravis, 2017).

We do not know precisely when Freud moved into his study full-time and lay upon his invalid couch but, in all likelihood, he did so only a few weeks before his death. Sadly, at that time, the genius physician and psychoanalyst began to experience some memory loss (Roazen, 1995) as well as tremendous physical pain from his long-standing carcinoma. Tragically, Freud’s bones became more and more foetid and emitted a putrefying odour which frightened his beloved chow (Jones, 1957) and, also, attracted countless flies; consequently, his attendants had to cover his makeshift invalid bed with mosquito netting (Schur, 1972). 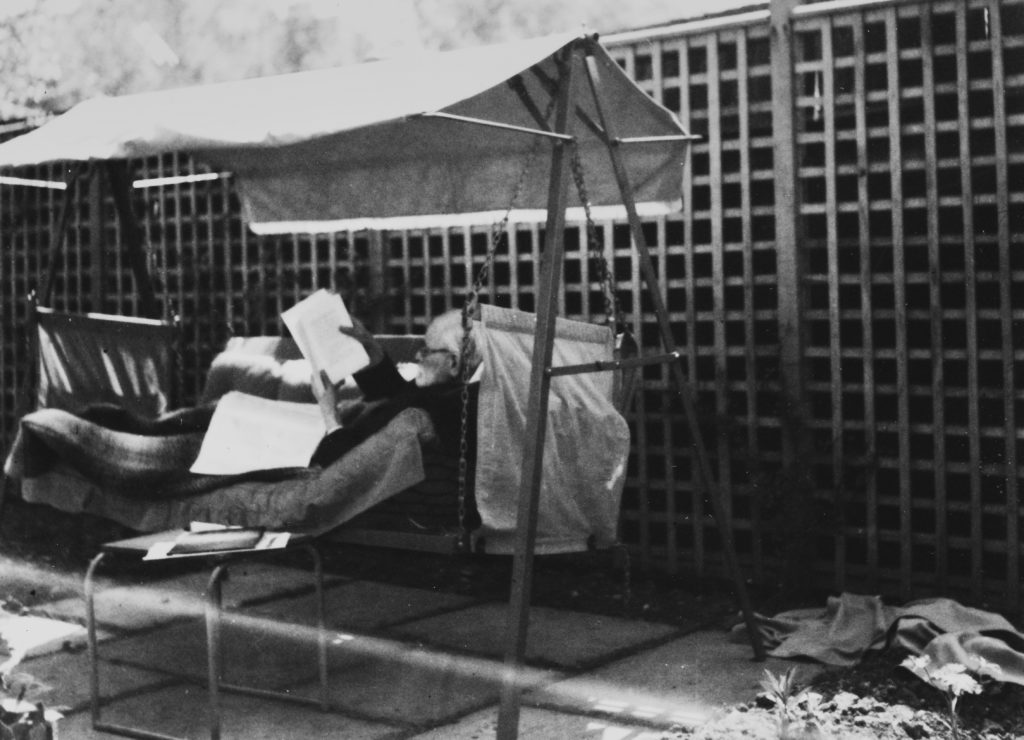 Sigmund Freud in the garden of 20 Mansfield Gardens, London 1939

As all Freud scholars will know, during his final days, he read Honoré de Balzac’s novel, La Peau de chagrin: Roman philosophique, in the original French, in an edition published in Vienna (Balzac, n.d. [1920]) – a book about a man whose skin begins to decompose. As Freud remarked to his physician, Dr. Max Schur, ‘ “This was the proper book for me to read; it deals with shrinking and starvation” ’ (Quoted in Schur, 1972, p. 528).

In spite of his progressive emaciation and his excruciating pain, Freud bore his final days with fortitude. Indeed, his sister-in-law Minna Bernays remarked that a more ordinary man might already have killed himself by this point (Roazen, 1993).

Eventually, in the small hours of the morning of 23rd September, 1939, the 83-year-old Sigmund Freud, died on his invalid couch, only a few feet away from the more famous carpeted and cushioned psychoanalytical couch.

To this day, Sigmund Freud’s death bed or invalid couch remains in the possession of the Freud Museum London, carefully preserved in a small upstairs storage room, which also contains the many boxes of archived papers of both Sigmund Freud and Anna Freud. This precious piece of furniture – catalogue item LDFRD 4902 – will, perhaps, one day be displayed to members of the general public. In the meanwhile, we must extend our thanks to the curatorial staff of the museum for permitting the publication of two photographs of this hugely resonant, even iconic, “other” couch – possibly the first time that such images have appeared in print.

Experience the unique atmosphere of Freud’s study and house. See the famous psychoanalytic couch and Freud’s death couch. Please note the death couch will be on display in the study until 9 February 2020 as part of The Uncanny: A Centenary exhibition. Plan your visit now.

Professor Brett Kahr is Senior Fellow at the Tavistock Institute of Medical Psychology and Senior Clinical Research Fellow in Psychotherapy and Mental Health at the Centre for Child Mental Health. A registrant of the British Psychoanalytic Council and a Trustee of the Freud Museum London and of Freud Museum Publications, his many books include Life Lessons from Freud and Coffee with Freud and, also, Six Months in Anna Freud’s Bedroom. He works in Hampstead, North London, with individuals and couples.

Acknowledgements: I wish to extend my particular thanks to Ms. Bryony Davies, Assistant Curator and Photo Library Manager of the Freud Museum London, for her gracious assistance.

Kravis, Nathan (2017). On the Couch: A Repressed History of the Analytic Couch from Plato to Freud. Cambridge, Massachusetts: MIT Press.

Posted in Museum Blog by Alice Rosenbaum on September 10th, 2019.