You are here: Home Blog When Dalí met Freud

The surrealist icon met with the father of psychoanalysis on 19 July 1938.

“Freud’s cranium is a snail! His brain is in the form of a spiral – to be extracted with a needle!”Salvador Dalí

Salvador Dalí’s first and only encounter with Sigmund Freud was fittingly bizarre.

The pair met on 19 July 1938 at Freud’s home in London, where he had arrived just a few weeks earlier as a refugee from Nazi-occupied Vienna.

By the time of their meeting, both Freud and Dalí had gained widespread recognition.

Freud, by then 81, was widely regarded as an intellectual giant. Dalí was just 34, but had already established himself as a key figure in the surrealist movement.

Dalí had been trying to meet Freud for a long time.

Like many of the surrealists, he revered psychoanalysis for the radical new light it shed on the life of the mind. As a student in Madrid he had immersed himself in Freud’s writings on the unconscious, sexuality and dreams. 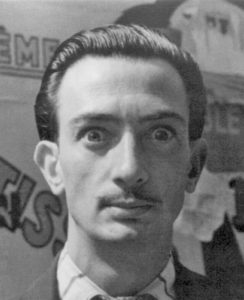 Salvador Dalí in 1934. Detail from a photograph by Man Ray.

Dalí yearned to meet Freud. He had already travelled to Vienna several times but failed to make an introduction.

Instead, he wrote in his autobiography, he spent his time having “long and exhaustive imaginary conversations” with his hero, at one point fantasising that he “came home with me and stayed all night clinging to the curtains of my room in the Hotel Sacher.”

Luckily for Dalí, they had a mutual friend in the Austrian author Stefan Zweig, who in 1938 was also living in exile in London, and arranged the meeting.

Enjoying this content? Please support us. We’ll remind you again at the end.

Freud was suspicious of the surrealists.

His artistic tastes were conservative: he was an admirer of the Old Masters, and had little time for the avant-garde movements that were emerging in his own lifetime.

On top of that, he had good reason to distrust the surrealists. In 1921 André Breton, the ringleader of the surrealist movement, had shown up uninvited on his doorstep and was received less than cordially. The meeting led Breton to publish a bitter attack on Freud, calling him an “old man without elegance” in his “shabby office worthy of the neighborhood GP.”

The pair later had a tense exchange when Breton falsely accused Freud of plagiarising parts of his theory of dreams.

Because of this, Freud may have been wary of Dalí. He might not have been aware that by the time of the meeting relations between Dalí and the surrealists had soured.

Dalí brought with him his latest painting, The Metamorphosis of Narcissus. 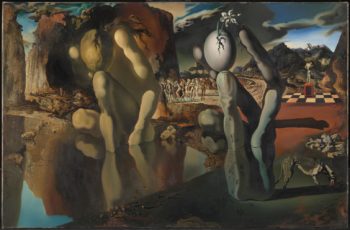 The painting is a surreal depiction of the Greek myth of Narcissus, the beautiful hunter who falls in love with his own reflection in a pool.

On one half of the canvas, Narcissus is represented gazing into the water. On the other half, the same form is repeated but this time representing the form of Narcissus as a hand clutching a cracked egg, from which a Narcissus flower sprouts.

Double images are a key feature of Dalí’s art, especially his method of ‘critical paranoia’, of which this painting is the first complete example.

According to Dalí, the meeting was a failure.

“I have never seen a more complete example of a Spaniard. What a fanatic!”Sigmund Freud

Dalí was trying to come across as “a kind of dandy of universal intellectualism.” He wanted to be taken seriously by Freud as a fellow researcher.

As well as the painting, he brought him a magazine article he had written on paranoia, but Freud “continued to stare at me without paying the slightest attention to my magazine.”

“Trying to interest him, I explained that it was not a surrealist diversion, but was really an ambitiously scientific article, and I repeated the title, pointing to it at the same time with my finger. Before his imperturbable indifference, my voice became involuntarily sharper and more insistent.”

As Dalí faltered before his idol, Freud was apparently forming a rather odd impression of him. “Continuing to stare at me with a fixity in which his whole being seemed to converge,” Dalí writes, he turned to Zweig and exclaimed: “I have never seen a more complete example of a Spaniard. What a fanatic!”

But Freud was more impressed than Dalí feared.

The day after the meeting, he wrote to Zweig:

I really have reason to thank you for the introduction which brought me yesterday’s visitors. For until then I was inclined to look upon the surrealists – who have apparently chosen me as their patron saint – as absolute (let us say 95 percent, like alcohol), cranks. That young Spaniard, however, with his candid and fanatical eyes, and his undeniable technical mastery, has made me reconsider my opinion.

During the meeting, Dalí made a number of sketches of Freud. 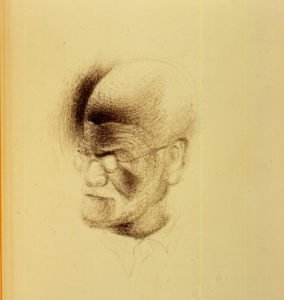 He later produced this portrait, apparently hoping to send it as a gift.

In Dalí’s memoir, he claims that the inspiration for the portrait came while he was eating snails in a restaurant in France, and noticed a picture of Freud in a newspaper.

“I uttered a loud cry. I had just that instant discovered the morphological secret of Freud! Freud’s cranium is a snail! His brain is in the form of a spiral – to be extracted with a needle!”

But Zweig thought the portrait resembled not a snail but a skull, a symbol of Freud’s impending death. Perhaps for that reason, there is no record that the portrait was ever shown to him.

Our exhibition, Freud, Dalí and the Metamorphosis of Narcissus, is on until 24 February 2019.

Posted in Education Blog by Stefan on February 4th, 2019.