As well as European antiquities, Freud’s collection includes a fascinating group of treasures from Central and South America.

Sigmund Freud’s collection of antiquities holds many treasures from Ancient Greece, Egypt and East Asia, but among these established collections sits a much smaller, equally interesting group of objects from Central and South America. 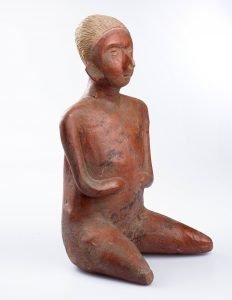 As with much of Freud’s antiquities collection, information on when and where he acquired the objects is scant. For a man who wrote so prodigiously throughout his life, Freud kept relatively few records about his personal belongings. Anecdotal evidence can be gleaned from letters and journals, such as when he would receive objects as gifts from friends, and occasional, more formal, evidence can be seen in the notes by curators at the Kunsthistorisches Museum in Vienna, authenticating Freud’s purchases as genuine artefacts.

Then, of course, there is the thorny issue of the excavations of such ancient treasures. In Peru the Moche civilization disintegrated before the arrival of Europeans, leaving no temples or pyramids, only shaft tombs containing figurines such as the one Freud owned. Most of these were excavated by looters and sold to European collectors without any information on their provenance.

Likewise the majority of west Mexican sites were pillaged, especially after the revolution, and archaeological pieces were sold to collectors with no provenance information. The Mexican kneeling figure (LDFRD 4559) was designed to be buried in a shaft tomb to accompany the spirit of the deceased on the journey to the underworld, showing testimony of initiations and critical stages in life. Freud probably acquired this object in the 1920s or early-1930s, but we have no records. 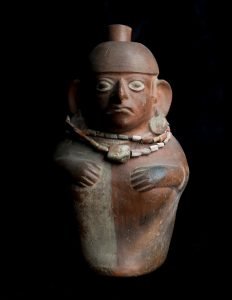 Peruvian (Mochican) vase in shape of a figure depicting a dignitary, circa 350AD. 18cm high.

The Moche vessel (LDFRD 4489) could have been given to Freud as a gift from a young Peruvian doctor named Honorio Delgado, who was a great admirer of his and worked on bringing psychoanalytical ideas to Latin America.  We know from their correspondence that Delgado sent many gifts to Freud and it is not unlikely that this vase was one.

The Mexican pieces are harder to trace as Freud didn’t have connections with Mexico during his lifetime and there was no real market for Central American antiquities in pre-WW2 Vienna.

Although these are the only examples in our collection, the Sigmund Freud Museum in Vienna reportedly holds an anthropomorphic idol made of green slate from Mezcala in West Mexico, dating between the 12th and 15th centuries AD. The Western Mexican region of Mezcala has now been designated by scholars as a separate and unique archaeological zone. No written records or evidence of lives remain from this region, only simple artistic productions depicting men women and animals to be placed in tombs. So all three of Freud’s pre-Columbian objects are from very remote areas, made by people with no writing and no record of their history or beliefs, and were looted to be sold to private collectors. All three are also funerary objects to be placed in tombs.

Posted in Curator's Blog by Bryony Davies on November 16th, 2017.