Sigmund Freud’s personal collection of antiquities is an integral part of the Freud Museum.

It provides an insight not only into his life and work, but also into the history of ancient cultures and societies.

The museum goes to great lengths to protect the objects from environmental damage, but sometimes a more dynamic approach is needed. This summer, renowned conservator Julia Park-Newman worked on a number of objects in Freud’s collection and here she explains her process.

It was a pleasure to work on Freud’s personal collection of antiquities with the knowledge that he chose and displayed these items in his study.

Today the vagaries of time and climate have alas taken their toll on the objects, so the Curators Sophie Leighton and Bryony Davies commissioned a condition audit which has enabled us to go through the collection, assessing those which are in the poorest condition and are in most need of conservation.

With the help of a private donation I was able to give the first objects conservation treatment. These included bronzes, ceramics, glass, ivory and painted wood objects. 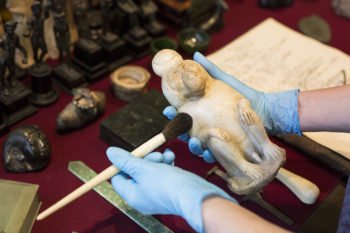 Checking the condition of Freud’s marble figurine of Thoth, the Egyptian god of intellect.

Freud’s bronze statuette of Minerva, the Roman goddess of wisdom

The Minerva bronze figure was showing signs of active corrosion which had expanded, pushing out the old repair on her skirt.

Old lacquer was removed and the corrosion was reduced; the metal was chemically stabilised and lacquered to arrest further corrosion.

Interestingly, the Minerva’s mount proved to be from the early 20th century. It was made of soldered metal plate and attached to the wooden plinth using hand-made square sectioned nails.

This old but uneven mount was retained by making a new mount which fitted over the top.

Looking at the ceramics, a number are held together with animal glue (made by boiling old animal skin, the main source of glue before the advent of plastics).

Unfortunately this type of glue will swell and shrink when subject to changes in humidity causing the glue to move. 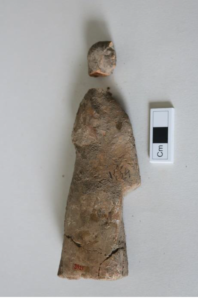 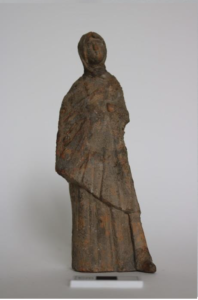 On this ceramic figure the glue had been used twice, once when the ceramic fragments were pieced together and once using a less heavily boiled mix incorporating chalk to fill gaps and cover edges.

In the picture you can see that this second glue has shrunk and lifted, taking some of the ceramic with it.

The repairs were sound, but the filler glue was reduced and the original ceramic that had lifted with it was replaced. 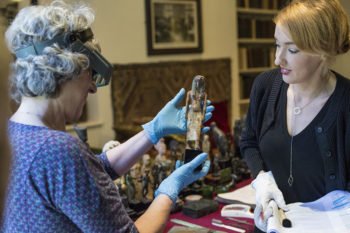 A horse of a different colour 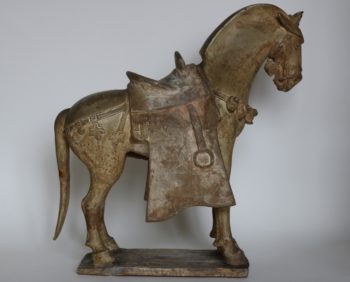 Terracotta figurine of a horse

This terracotta horse had previously been repaired three times on the legs, ear and tail. An early repair had concealed and supported the repair under an applied red band.

The horse had once been painted – especially on the blanket – with white and red ochre, some of which remains, though weakly attached to the ceramic.

To conserve, after lifting away loose dirt, the more recent repairs were removed or reduced and the repairs reinforced with conservation materials.

Where there were old breaks and losses these were filled to match the original colours, whilst the loose paint was re-attached.

The horse, now clean and stable has returned to Freud’s study.

Through caring for the environment around the objects, the collection can be seen and enjoyed for many years to come.

Preserving the collection for all

The work of the conservator is to preserve and retain the integrity of the antiquity whilst interfering as little as possible. Anything applied to the artefact needs to have been age-tested to ensure that it does not adversely affect the object in the future.

Through caring for the environment around the objects – preventing temperature and humidity changes, reducing damaging light, removing acidic dusts and managing pest ingress – the collection can be seen and enjoyed for many years to come.

Something that I know the Freud Museum is committed to achieving.

Posted in Curator's Blog by Stefan on September 5th, 2017.